Analogue Mastering And Why It Matters

If you’ve spent any time at all within the world of music production the debate between analogue and digital processing must have crossed your path at some point.

It’s not a new discussion and one that will probably never be fully agreed upon. Because audio mastering is the final step before your music is distributed to the general public, pressure to obtain the highest quality results forces most engineers to consider only the best of the best tools for the job. And even with the advent of high quality digital plugins abound, analogue mastering hardware still maintains a firm grasp on our daily workflow.

So what is it about analogue equipment that still gives it an advantage over their digital counterparts for an online mastering house such as Medway Studios?

As you can see, there are quite a few opposing methods to design an analogue audio circuit, each one imparting a specific type of sound. Beyond the overall design the types of components make a difference, too. For instance, capacitors are one of the most common electrical parts used in constructing an electronic device. What type of capacitor used, be it film, ceramic, or something like a tantalum based one which is known for being less reliable yet imposing a ‘darker’ sound to the audio path which could be construed as ‘warmth’ in certain circuit designs.

When it comes to mastering-grade hardware units, the type of amplifier used is normally of an A graded class. This offers less distortion and higher performing specifications, obviously desirable in this type of equipment.

All of the above options are carefully considered and selected by the equipment designed to give the desired sound at a the accepted price point.

Some designs might strike a balance between good sound and affordability. High end mastering equipment usually forgoes the affordability part of the equation, instead opting for the best money can buy.

What Is The Alternative?

Digital emulation of analogue and acoustic sound sources have been attempted for decades, slowly improving (depending on your tastes) over time. Currently, some of the leaders within the field of digital emulations include UAD, Waves, and Slate Digital, just to name a few. They create simulations of the circuits described above that try to trace the same path electrons take in an analogue device.

The result, if don’t correctly, is a reasonable facsimile of the emulated device, many times even with its quirks and limitations intact. Another approach, as seen in units such as the Focusrite Liquid Mix, or Acustica Audio’s Nebula plugin, is to sample a test tone at various levels into the device and record the output. Through a process called convolution, this signal is then de-convolved. The character of the hardware unit is then separated from the signal so it can be used to effect your own signal sources.

Both of these methods can yield great results. So if that’s true then why do mastering houses such as Medway Studios still use analogue EQs and compressors then?

Why Is It Better?

Despite the advancements in technology, matching the behaviour of a real-life analogue device is still never 100% accurate. There are multiple reasons for this. One is economically any software programmer must balance the time and resources spent measuring and matching a particular unit with the potential profit that can be recouped when selling it.

Probably more important, however, is that analogue circuits are not completely predictable. Factors such as heat, component tolerances, and the general random nature of electrons flowing through a circuit prevent any simulation from capturing their sound completely. Even simple electronic designs can have multiple complex interactions with how they operate.

A common pitfall in designing software to mimic this behaviour can mean that while adjusting one section of the emulation to perform more accurately it throws another off. At this point the programmer might have to strike a balance between the two, but never fully achieving their aim.

Even within the hardware world a small change in components can drastically change the sound of a piece of gear. Imagine then trying to model this subtlety in software when even hardware manufacturers struggle to copy older designs to sound the same in their modern recreations due to unavailable out of production components.

How Can It Help You?

Now we’ve established that digital recreations don’t always hit the mark what is it about analogue processing that’s so valuable in the first place?

The first, most obvious difference is the hands on, tactile feedback that physically adjusting a real-world piece of hardware can bring to a session. Plugins are great for recall-ability and entering fine values, but hardware surfaces offer a more zen-like experience when making adjustments that can create a better result overall. Recalling analogue is also simply a matter of taking a little extra time to write down settings and then set them up again. A minor inconvenience when the benefits are weighed.

But what about the actual sound?

The types of processes that are applied in mastering and mixing can be summed up as:

We’ll leave out other processing such as effects like reverb and delays for this particular article as it’s mostly focused on mastering and to some extent mixing, where the two overlap.

Compressors are used to shape both the attack and release portions of a signal, especially useful for getting kicks to punch through when mixing EDM music or any other electronic genre. This can be done for a variety of reasons that include raising the average level of a signal to polishing and tightening it for a tighter and more musical groove. There are many great sounding digital compressors available today but they usually all fall down in two respects when compared to the best analogue ones.

If you listen closely to the attack stage of our SSL compressor and then any of the available emulations (I’ve tried them all) you’ll notice that the hardware remains both punchy yet round and warm at the same time. Emulations, on the other hand, usually sound too hard and harsh at this critical stage. This transient is over in an extremely short time yet still contributes heavily to the overall sound of a mix, especially when played at loud volumes.The release stage suffers another fate. This portion of the audio’s envelope is responsible for the groove and feel of your music.

Compressors such as the API 2500 and SSL both offer very musical and groovey release stages that can transform a flat piece of music into something much more pleasant and interesting to listen to. In comparison, digital plugins usually have a more erratic release stage that can give music a nervous quality where something just doesn’t sound right.

When we speak of using an EQ it’s important to separate out the equalization itself with any other factors such as harmonics and saturation. Purely from a filtering aspect, the differences between hardware and plug-in EQs can be quite small. Once an exact curve and the resulting phase shift is accounted for all that is left are the secondary factors which we’ve temporarily excluded from the conversation, again harmonics and saturation.

EQ does greatly benefit from a hands on approach, especially being able to adjust multiple controls at once, something that hardware can provide. Software controllers do exist, however. But while they can provide some of the visceral feeling of turning a hardware’s EQ knob they never fully replace the experience.

Both EQs and compressors can add another sonic enhancement to material by way of added harmonics and saturation. If you’ve ever heard of engineers running audio through a piece of gear simply for the sound of it, without actually applying EQ or compression, this is usually what they are referring to. 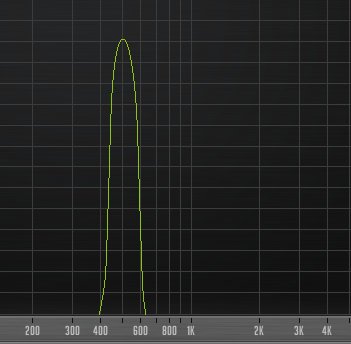 Harmonics are distortion that results in extra information being added to the signal at particular points in reference to the original signal. Even order harmonics occur at octaves above the fundamental. For instance, and tone of 500hz would then have harmonics at 1000hz, 2000hz, 4000hz, and so on. Each harmonic will normally be of decreasing amplitude.

Check out the first set of pictures, the top is an un-processed sine tone, the second has even harmonics applied to it.

Odd order harmonics will happen at other intervals than octaves, 3rds and 5ths. In the example above the odd harmonics would be at 300hz, 500hz, and continuing above.

Which One Sounds Better?

Even harmonics are usually considered more natural and assist in thickening a signal without being unpleasant.

Odd harmonics can add interest to a sound but too many of them can sound harsh, although for a screaming techno lead sound this can be exactly what’s needed. 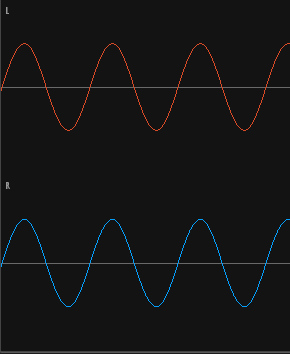 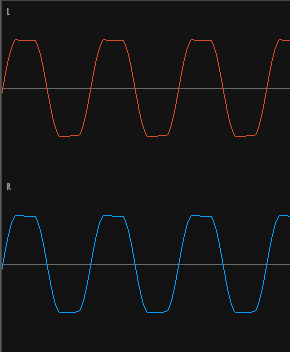 Valve (tube) based amplifiers, such as the Pultec EQ used in Medway Studios, generate mostly even order harmonics, tape and transformers result in more odd ones.

Saturation can be thought of as a form of compression. It is a side effect of distortion and is characterized by a modified waveform that is reshaped and flattened to various degrees.

An extreme example of this would be to take a perfectly round sine wave, then overdrive it until the top and bottom of the wave is completely chopped off, generating a square wave.

The second set of photos illustrate this. The first is, again, and untouched sine wave, the second has saturation applied which is modified the shape of the wave (and also adding harmonics).

How Is This Useful?

Saturation can be used to raise the average level of a signal similar to what a peak limiter does. With the right type of processor this can sound more musical and pleasing, however, than a digital limiter might. As the signal is saturated, harmonics are generated too.

Both saturation and harmonics are two areas where analogue processing still holds a distinct advantage. Distortion especially is very difficult to model correctly as even a tiny difference in the behaviour of a digital modelled circuit can result in a less pleading sound.

Although this was a long article it really only scratches the surface on the differences, including both pros and cons, of what digital plugins and analogue hardware can bring to the table. Hopefully it has shed a little light on what many consider a mysterious subject and dark art.

However, given enough time, anyone can understand and use this knowledge to improve their mixes and masters. The bottom line is that although high end analogue hardware doesn't come cheap, the superior results make it worth it in the end.

And despite the cost of purchasing and maintain this type of gear it can still be an affordable mastering service for those who want the very best.